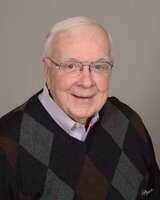 Thomas "Tom" Karl Metzger of Carrollton, Texas passed away peacefully on November 10, 2022, at the age of 85. Tom was born on February 4, 1937, to Karl and Marita Metzger in Galena Illinois. Growing up, if he was not busy helping in the family grocery store, he spent time playing numerous sports and lifeguarding at the public swimming pool. He attended the University of Illinois where he studied Political Science and was active in the school’s ROTC program. Upon graduation, Tom was commissioned as a Field Artillery officer in the U.S. Army and was stationed at Fort Sill, Oklahoma. After being honorably discharged, Tom had a successful career in operations working for American Hospital Supply and Baxter International, where he built many lasting and impactful relationships with his peers and employees. Following retirement, Tom spent time traveling to historical sites, researching genealogy, and watching sports on the weekend. But most of all, he enjoyed spending time with his family. Tom was preceded in death by his parents and sister Norma Jean Nagle. He is survived by his wife Judy, children Michael (Jennifer), Jeffrey, Melissa, and grandson Emerson Metzger. He is also survived by his brother Dr. Robert (Carol) Metzger and numerous nieces and nephews. A visitation for Tom is planned for Wednesday, November 16, 2022, from 5 pm to 7 pm. at Saint Catherine of Siena Catholic Church 1705 E Peters Colony Rd, Carrollton, Texas. Funeral Mass and reception will be held the following day, November 17 at 11:00 am at the same location. Tom will be interred at the Dallas-Fort Worth National Cemetery. In lieu of flowers, please donate to Metrocrest Services or Faith Presbyterian Hospice.