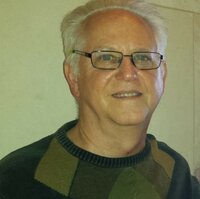 James Ed (Jim) Howe, Jr, age 77 of Dallas, TX passed away on Friday, June 10, 2022, in his home in Carrollton, TX. Visitation with his family and friends will be held at Merit Memorial Funeral and Cremation Care on Tuesday, June 14th between 2:00 and 4:00pm. There will not be a formal service or funeral. Guests are invited to come and go at their convenience during the 2-hour window. Jim was born in Dallas, TX to James Ed Howe Sr and Mildred Howe on May 26, 1945. He played sports and served as Senior Class President at North Dallas High School, graduating in 1963. He followed in his father’s footsteps going to work at G.K. Harris Sales Co. part-time and continued working full-time for G.K. Harris/Nationmark/BMK for 37 years. He enjoyed annual family vacations in Colorado and later came to love going on cruises and excursions in Mexico, Honduras, Belize, and many other places. He was a member of PFLAG for 11 years and served on the Board of Directors as Treasurer. Jim is survived by his wife of 53 years, Sondra Howe of Dallas, TX. He is survived by daughters Lisa Howe and Marcy Howe, daughter-in-law Wendy Howe, sister Barbara Speaker, sisters-in-law Ann Brandenburg and Mabel Brandenburg, brother-in-law Allen Brandenburg, granddaughter Hope Howe, nephew Mike Bowen, and niece Alicia Langley. He is preceded in death by his parents James and Mildred Howe and parents-in-law Ernest and Nono Brandenburg. Memorial donations may be made to PFLAG Dallas. https://bit.ly/3aKAP2r