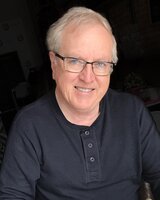 Robert Alan Christiansen (Bob) age 77, of Plano, Texas, passed away on June 3, 2022, in Dallas, Texas, after a courageous battle against lymphoma. A memorial service will be held at Faith Presbyterian Chapel-T. Boone Pickens Center, 12477 Merit Drive, Dallas, Texas, on Wednesday, June 15, 2022, at 12:00 PM with Reverend Jarod A. Cooper officiating. There will be a visitation beginning at 11 AM. A burial with military honors will follow at Dallas-Fort Worth National Cemetery, 2000 Mountain Creek Parkway, Dallas, Texas, at 2:15 PM. Robert Christiansen was born on July 26, 1944, in Brooklyn, New York, to Arnold Christiansen and Lillian June Christiansen (Cabral). He graduated from Derby Senior High School (Kansas) in 1962. Stationed at the Grand Forks AFB, he served in the United States Air Force for four years, including one tour in Vietnam. He earned degrees in Mathematics and Electrical Engineering from the University of North Dakota. He married Bonnie Kay Wold on March 1, 1968. Upon graduation, he accepted a position at Texas Instruments and moved his family to Plano, Texas, in 1973. He worked in the Defense Systems group at Texas Instruments for 27 years; he was our real rocket scientist. Bob was a lifelong learner and loved reading, especially non-fiction and textbooks. His culinary skills made family gatherings special, and he was best known for his famous cheesecakes. Being a judge at regional and international science and engineering fairs was a hobby that he enjoyed for over 25 years. He traveled extensively across the US and internationally and never met a stranger along the way. His greatest role was being Grandpa. He took his grandchildren on many adventures and attended countless sports and other events. Robert Alan Christiansen is survived by his wife of 54 years, Bonnie Kay Christiansen (Wold) of Plano, Texas. He has four children: Shannon Freiberg, Melissa Hyatt (Tommy), Kimberly Goodwin (Robert), and Jason Christiansen(Trevisha). He is survived by nine grandchildren who he adored: Brandon Freiberg (Abigail, “Abby”), Zachary Freiberg, Sam Hyatt, Luke Hyatt, Jack Hyatt, Marina Gardoski (Joel), Nathan Goodwin, Brenda Christiansen, and Julius Christiansen. He has three great-grandsons: Luca Freiberg, Arlo Freiberg, and Milo Gardoski. His surviving siblings are Nancy Ericksen, Ronald Christiansen (Marcia), and Lori Cade (Sydney, “Bucky”). He was preceded in death by his parents, Arnold and June Christiansen, and his brother, Chris Christiansen. Memorial donations in honor of Robert Christiansen may be made to St. Jude to help kids fight cancer, online at stjude.org or by mail to ALSAC/St. Jude Research Hospital, 501 St. Jude Place, Memphis, TN 38501. Please consider honoring him by being a blood donor to help other cancer patients continue their battle. It was the life-saving blood that enabled him to be with us for as long as he could. The family wishes to extend their gratitude to Dr. Vance and his team at Texas Oncology, the nurses who took care of him in the Apheresis Clinic and on the oncology floors at Medical City Dallas, and to the loving staff at Faith Presbyterian Hospice-T. Boone Pickens Center who showed compassion, care, comfort, and kindness in his final days to both him and his family.