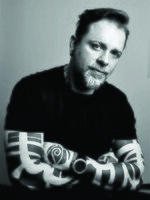 Terry Sean Mayo, 52, of Dallas, Texas, passed away on May 21,2022 after fighting pancreatic cancer. Terry was born on February 18th, 1970 to Terry Wayne Mayo and Debra Ann Mayo in Kaufman, Texas. After Terry graduated from North Mesquite High School in 1988,He went on to learn the art of tattooing in Deep Ellum. Terry eventually opened his own studio, Cat Tattoo, in Addison, and oversaw its operation for twenty six years. In 1991 and 1996 Terry Mayo and his former spouse, Tracy Lamp, went on to have two children, Kaleb Ryan Mayo and Ian David Mayo. Terry was a monumentally influential man. His art and his studio has marked generations of people. Terry loved living adventurously, and experienced such a rich, vibrant existence to tell enough stories for eight lifetimes. He lived according to his own compass but had the will and wisdom to help others find their own way. He was a mentor, friend, father, brother, son, artist, entrepreneur, storyteller, and lover. Terry is survived by his parents, Terry Wayne Mayo and Debra Ann Mayo; his sister Rachel Mayo; his brother Derek Wayne Mayo and his wife Kristin Mayo and daughter Jessie Mayo; his children Kaleb Ryan Mayo and Ian David Mayo; several cousins, aunts, uncles, and the countless friends and lives Terry has touched throughout his life.