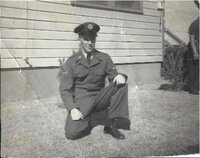 Joseph Carl (J.R.) Reeves, was born in Elba, Alabama on December 9, 1937, and went to live in his heavenly Home on August 28, 2021, at the age of 84 years old. J.R. met the love of his life, his sweetheart and honey, Yvonne Dean, 66 years ago while working in J.C. Penney’s as a shoe salesman; and they recently celebrated their 64th wedding anniversary on July 7, 2021. J.R. and Yvonne have lived in Irving, Texas, for the past several years so they could be close to family (their “girl tribe”) after spending many years living in different parts of the U.S. J.R. served 30 years in the U.S.A.F., retiring as a Chief Master Sergeant (CMSgt), and received numerous awards including the Bronze Star Medal after serving in the Vietnam war. J.R. continued his work with the US Gen. Services Administration for 15 years before retiring and coming to live in the DFW area. For those who knew J.R., his life was full of love - for God, his family, and his Country, and music, an undeniable gift that blessed so many. J.R. taught himself how to play the piano, and every USAF base where he was stationed, we could always find him playing for a service at the local base Chapel. In 1961, J.R. and Yvonne welcomed their first daughter, and in January 1963, their second daughter was born and completed their little family. By March 31, 2021, they had 3 granddaughters and 2 great grand-daughters, forming his “girl-tribe”. J.R. is preceded in death by his parents, Harold and Olene Reeves, of Andalusia, Alabama, and brothers Lister Hill Reeves, Roger Reeves, T.L. Reeves, and Jerry Reeves; and is survived by his beloved sweetheart, Yvonne Reeves, daughters Teresa Rodden and Pamela Letbetter, granddaughters Nicole Letbetter, Brittany Letbetter, and Stephanie Parker, great granddaughters Hannah Parker and Haven Parker, sisters Elaine Lucas of McKenzie, Alabama, and Joann Northcutt of Birmingham, Alabama, son-in-law Paul Letbetter, and many cousins, nieces, and nephews. J.R., you were so very loved, and taught each of us what it means to trust the Lord no matter what. Your heart of generosity and compassion for all you met is your Legacy for our family. We all miss you and are comforted knowing you are in the Arms of Love (maybe playing those ivory keys a little bit too!) J.R. will be buried on Monday, September 6, 2021, at 10:30 a.m., at the DFW National Cemetery, 2000 Mountain Creek Parkway, Dallas, Texas, 75211. In lieu of flowers, memorial donations may be made to Wounded Warriors Project (www.woundedwarriorproject.org) or Terry Veazey Ministries, Inc. (www.terryveazey.com)