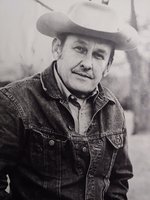 James Robert (J.B.) Cline James Robert (J.B.) Cline peacefully passed away on January 27, 2021. He was a devoted husband of 67 years to Patsy Patrick Cline and a loving father to Sally Cline Lutz (Ron) and Carol Cline Ottaviano (Joe). His legacy includes four granddaughters, Julie Kanstroom (Dan), Cece Dahlstrom, Kimberly Leopold (Sam), and Kelsey Kojetin (Tim); along with 4 great-granddaughters Harper Kanstroom, Eloise, Evie, and Emory Leopold. He is also survived and loved by his sister, Joan Cline Brown, and all of his extended family. He was predeceased by his parents and his brother Delbert. J.B. was born in Carthage, Missouri on June 9, 1927, to Ralph and Nelle Cline. His family and friends knew him as Jim Bob. He was adventurous at an early age, buying his first Harley as a teenager, then selling it to take flying lessons. At 17, he enlisted in the Navy and served in Japan on the USS Gainard as WWII ended. He saw Okinawa soon after the bombs hit. After the war, J.B. studied business and graduated from the University of Missouri. He then moved to Dallas to go into the wholesale lumber business. First, he found the perfect business partner in Hobart Moses, founding Moses and Cline Forest Products. Soon thereafter, J.B. found the perfect wife in Patsy Patrick, saying “she was the best investment I ever made”. In the early 1960s, Moses and Cline was one of the first businesses to move to Addison. J.B was from Missouri but was a true Texan at heart. He loved to hunt, fish, and spend time at his Triple C Ranch with family and friends. He was an avid Dallas Cowboy fan, dating back to the Cotton Bowl days. Golf became his retirement passion, playing often at the Dallas Country Club. J.B. had a quiet Christian faith, preferring to live it out by serving at the Stewpot, greeting guests with his friendly handshakes, and singing funny songs. He also was an elder in the Presbyterian church, most recently attending Highland Park Presbyterian Church. He was a man of honesty and integrity with a huge, kind heart. J.B. once said his epitaph should read “Worked hard, loved hard, and died happy”. Well done, good and faithful servant! There will be a family celebration of life for J.B in the days ahead. In lieu of flowers, memorial gifts may be made to The Stewpot, 1835 Young Street, Dallas, TX 75201, or the charity of your choice.